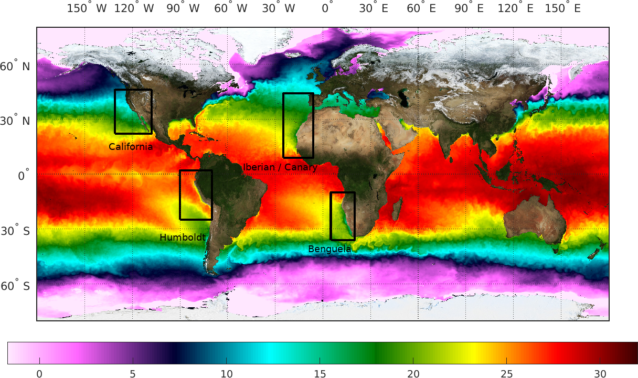 Upwelling ecosystems located on the eastern side of the Atlantic and Pacific oceans (Figure 1) are known for their high biological productivity that supports large marine populations and for their major contribution to the world marine fish catches (Pauly and Christensen, 1995, Fréon et al., 2009; Capone and Hutchins, 2013). Ocean acidification (Feely et al., 2008), algal blooms and low oxygen events over these continental shelves are tightly linked to the dynamics of the upwelling process (e.g. Pitcher et al., 2010, 2014, Lachkar et al., 2012) and these regional-scale dynamics are not well represented in existing models used to predict our future climate (Small et al., 2015, Di Lorenzo, 2015). In order to characterize the spatial and temporal variability of the four major eastern boundary upwelling systems and investigate linkages between upwelling and episodic events such as marine heat waves, a new sea surface temperature-based upwelling indices time series is being developed. Index calculations are based on the European Space Agency Sea Surface Temperature Climate Change Initiative (ESA SST CCI) analysis product that provides daily global gap-free sea surface temperature fields at a 0.05° horizontal grid resolution and covering the period 1st September 1981 to the present day. The method used to derive the upwelling indices is based on a segmentation algorithm using Gaussian mixture models, as illustrated in Figure 2. Initial results of change in the sea surface temperature due to these upwelling events and the extent over which these changes in temperature extend can be seen Figure 3.

Investigating linkages between these flows, their extent, and how they alter the marine carbonate system conditions will enable these episodic upwelling driven changes in the carbonate system to be monitored and studied from space.