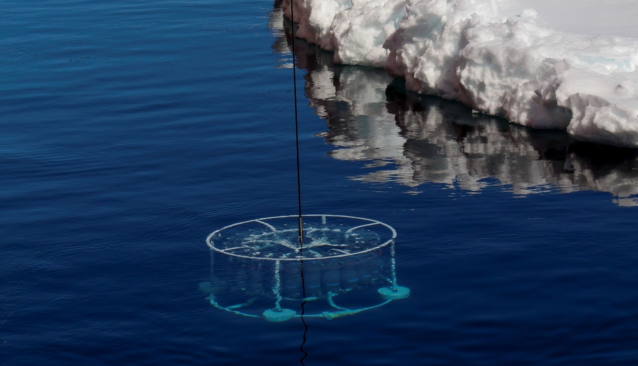 The oceans have taken up more than one-third of anthropogenic carbon dioxide (CO2) since the start of the industrial revolution. This has slowed the increase in atmospheric CO2 concentrations, but not without effect on the chemistry of the ocean. The oceans have already become 30% more acidic over this period with a 0.1 unit decrease in pH. This effect will continue as CO2 emissions continue to rise.

One of the aims of the Ocean SODA project is to develop techniques that can monitor these changes in pH from space. However, satellites cannot estimate pH directly. The scientists at ETH Zurich are using a two-step process to derive satellite-based pH: First estimate the total alkalinity (TA) and the partial pressure of carbon dioxide from satellites, and then compute the pH using the well know chemistry of CO2 in the ocean. In this article, we focus on the estimation of total alkalinity.

Surface ocean TA is estimated from existing ship measurements from the GLODAP v2 database. These measurements are made by collecting water samples using a CTD (as shown in figure 1). With enough ship-measured samples, a relationship between these in situ samples and satellite observable parameters (such as temperature and salinity) can be derived. We use multi-linear regression to arrive at the estimates of TA.

As a first step, we have created low-resolution estimates of TA at 1×1° spatial resolution and monthly temporal resolution from satellite sea surface temperature and an optimally interpolated salinity product (based on in situ data). A snapshot of this product is shown in the image below. In the next step, we will replace the in situ salinity product with satellite estimates of surface ocean salinity that has been developed by the European Space Agency, permitting us to estimate alkalinity at higher spatial and temporal resolutions.